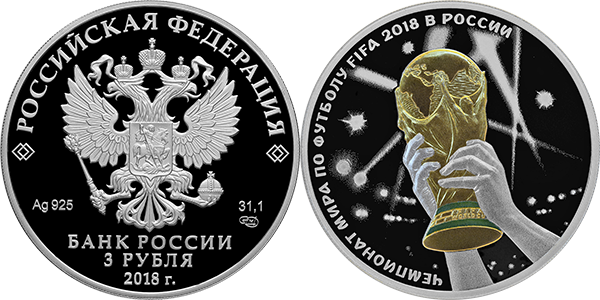 Presented by
Central Bank of the Russian Federation/ Saint Petersburg Mint of Goznak (Russia)
Nominal value
3 rubles
Weight
33,94
Diameter
39,00
Metal
Silver 925°
Mintage
12000
Production quality
Proof
Designer
The artists: E.V. Kramskaya (obverse), S.A. Kozlov (reverse). The sculptors: A.A. Dolgopolova (obverse), A.N. Bessonov (reverse)
Producer
Saint Petersburg Mint of Goznak (Russia)
Description of obverse and reverse
The obverse: on the mirror field of the disc the relief image of the National Coat of Arms of the Russian Federation, over it along the rim the semicircular inscription "РОССИЙСКАЯ ФЕДЕРАЦИЯ" (RUSSIAN FEDERATION), framed on both sides by doubled rhombuses, below under the coat of arms to the left indications of the precious metal and its fineness, to the right the fine metal content and the mint trade mark, at the bottom in the centre in three lines the inscription "БАНК РОССИИ" (BANK OF RUSSIA), the denomination of the coin "3 РУБЛЯ" (3 RUBLES), the year "2018 г." (2018).

The reverse: an image made by use of techniques of partial gilding and colour elements: of hands holding the FIFA World Cup Trophy against the stylized stadium bowl; along the circumference on the left the inscription "ЧЕМПИОНАТ МИРА ПО ФУТБОЛУ FIFA 2018 В РОССИИ" (2018 FIFA WORLD CUP RUSSIA).
A brief annotation
The World Cup 2018 is the XXI FIFA World Cup, the final part of which will be held in Russia from June 14 to July 15, 2018. For the first time in its history Russia will become the host country of the world football championship, in addition, it will be held for the first time in Eastern Europe. It will also be held for the first time on the territory of two parts of the world - Europe and Asia and for the first time in the territory of the former Soviet Union.
Реклама
New issue
№ 4(61) 2022 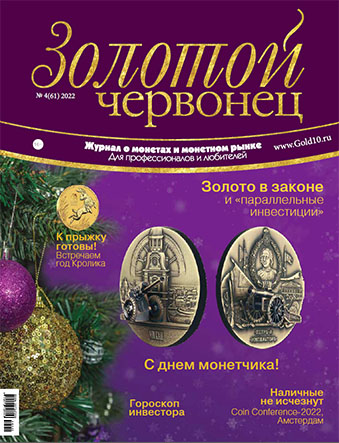