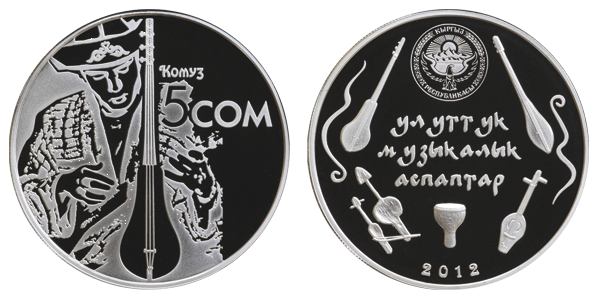 Presented by
National Bank of the Kyrgyz Republic
Nominal value
5 som
Weight
14,35 g
Diameter
33,0 mm
Weight
14,35 g
Mintage
3 000 pcs.
Production quality
Brilliant uncirculated
Designer
Obverse: Murat K. Sagimbaev Reverse: Kanybek A. Turumbekov
Producer
Lithuanian Mint
Description of obverse and reverse
Obverse: in the center there is an image of komuz in hands of a skilled artist called “komuzchi” in a white cap.
Reverse: the coat of arms of the country, in the centre - the name of the coin series in Kyrgyz "National Musical Instruments" and the year of issue (2012). Since the "Komuz" is the first coin of the series, on the reverse of the coin there are the images of other musical instruments like Kyl kyyak (stringed instrument), dobulbas (drum).
A brief annotation
Komuz is a Kyrgyz folk three-stringed musical instrument (like a lute). Its body is made of one piece of wood, mostly a dried apricot. Komuz has a rich variety of sounds. According to a legend, there lived a hunter named Kambarkan who understood the "language" of many birds and animals recognizing each of them by their sounds. One day, while he was in the woods, he heard a new wonderful sound. He was so captured by this incredible sound that he started searching for its source. For a better overview the hunter climbed a tree and from there he saw two branches of a nearby tree connected with a dried bowel of a squirrel. The sound was coming from this "string". He took a piece of string together with the timber and made a musical instrument. Thus, he became the founder of the national music and still known as the "Father of melody."
Оцените монету
Что бы проголосовать вы должны авторизоватся
Реклама
New issue
№1 (58) 2022 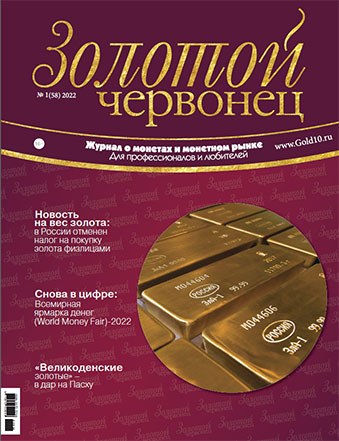